22 Memorial Danilo Re: a winter’s tale 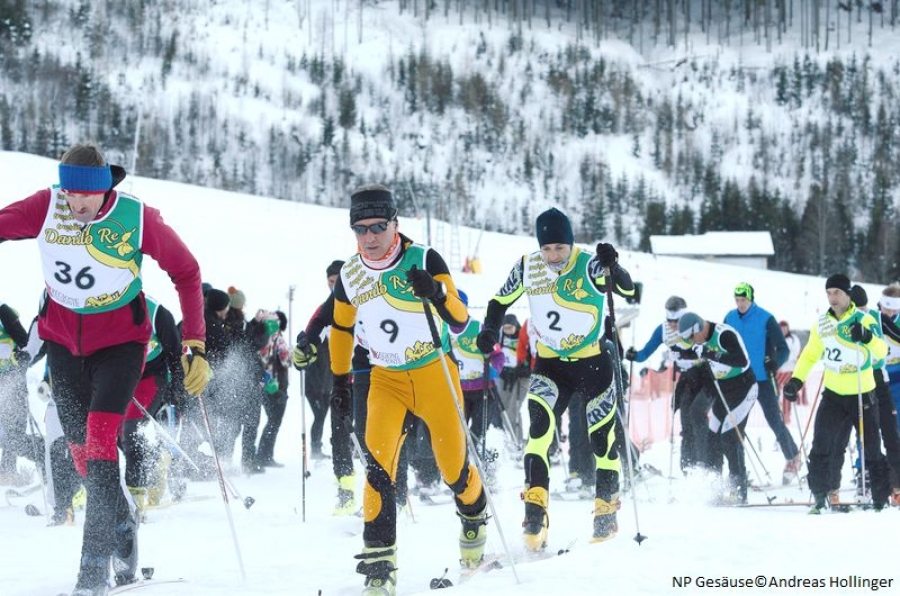 The 2017 edition of the international Memorial Danilo Re, the official games for Alpine protected area rangers and protected area staff, took place from January 26 to 28 in the Gesäuse National park in Styria (Austria). In fairy tale-like winter conditions, more than 150 participants from Austria, France, Germany, Italy, Switzerland and Slovenia competed in four disciplines in the small sport resort of Kaiserau close to Admont. As every year, the event also was the occasion for rangers, park staff and directors to meet, exchange and network.

Memorial Danilo Re as good start for the Austrian presidency of the Alpine Convention
After the traditional parade of the teams accompanied by torch light and traditional Styrian music through the streets of Admont, the Secretary General of the Alpine Convention Markus Reiterer, in the name of the Alpine states, warmly welcomed the 36 teams and their supporters. For Austria, which took over the presidency of the Alpine Convention in October 2016, Günter Liebel of the Federal Ministry for the Environment highlighted the radiant character of the event for the start of the presidency period. Both officials underlined the importance of the Memorial Danilo Re as unique and connecting event in the Alps, that perfectly communicates the joint efforts to preserve this valuable natural and cultural space that are the Alps to the greater public.

Platform for exchange: seminar on the nature interpretation approach
The Memorial Danilo Re has for years provided an optimal platform for the exchange of those employees from the Alpine protected areas who are responsible for monitoring, education and knowledge transfer. A broad professional task field, which is not only challenging, but also vital to man and nature. Within the framework of the memorial, expertise, exchange and dialogue are combined and bundled. This year, the focus of the seminar laid on a contemporary education and knowledge transfer method, the nature interpretation approach.

The Danilo Re Trophy: overall victories for Germany (men) and Austria (women)
Giant slalom, cross-country skiing and shooting - these are not only the disciplines that form the core of Olympic winter games, but also precisely the sports - supplemented by ski mountaineering - within which the participants were able to compete. Similar to the Olympic spirit, participation and joy stood in the foreground of the games, which offered a challenge for all.

A big thank you to all the 36 teams who took part in this 22nd edition, and special thanks to the team of the Nationalpark Gesäuse and the other local organizers for making the event happen in perfect conditions. See you all, hopefully, in Berchtesgaden (DE) in January 2018.

Click here to see the photos of the event

See the detailed results by downloading the document below.

Source: The text is partly based on the press release (German) of the Nationalpark Gesäuse(30/01/2017) available below