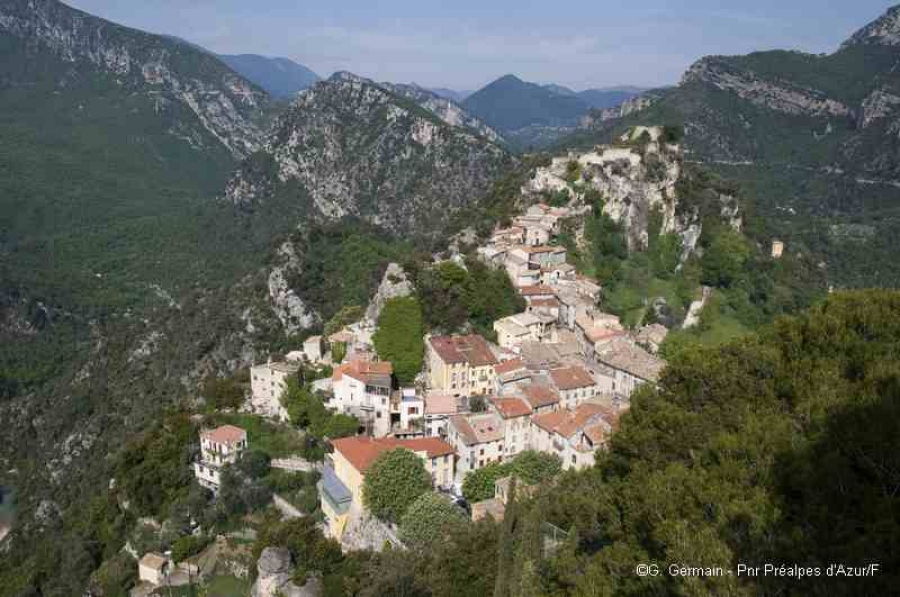 Between the prestigious Riviera and the high mountains of the Mercantour, this mountainous territory, composed of karst plateaus, gorges, forests and fertile valleys, the Préalpes d'Azur is still relatively unknown. There is a rural culture reigning, around picturesque, alive and convivial villages.

This is one of the territories of France's richest biodiversity; a third of the French flora is present there, the result of thousands of years of interaction between man and nature and always closely linked to the maintenance of pastoral activity.

The crossing of the Mediterranean and Alpine influences, together with an area which was preserved of major developments, make it exceptional. Added to this no less than 2000 caves and 140 km of underground tunnels form the accessible part of the vast underground network, so the Préalpes d'Azur are a real water reserve for the Côte d'Azur.

Historically, people lived by agriculture, forestry and pastoralism. Later, when the perfume industry grows in Grasse, this area lives in the rhythm of fragrant plants culture.

Most villages were built in the Middle Ages and their particularity is the location in height, positioned on rocky headlands.

Witness of the adaptation of human habitations to the marked relief of the territory, they were built this way to ensure also a defensive position.

The silhouette of the ancient villages could be preserved and cultural heritage is considerable: chapel Gratemoine in Séranon, ruined village of Gréolières, medieval church of Mas, architecture with Russian influence in Thorenc etc. Napoleon I crossed the territory on his return from Elba, on the road that now bears his name.

The Préalpes d'Azur permit the practice of a whole range of outdoor activities (hiking, mountain biking, horse riding, paragliding, climbing, whitewater, caving, via ferrata, summer and winter activities in the stations of Audibergue and Gréolières-the-snow, making it a favorite destination for active visitors.

In March 2012, fulfilling the desire of 45 municipalities, 8 village communities (EPCI), the department of Alpes-Maritimes, the region Provence-Alpes-Côte d'Azur, state, residents and professionals to work together; the territory has been awarded as Regional Nature Park.

He became the 48th Regional Nature Park of France and the 6th in the region Provence-Alpes-Côte d'Azur, constituting a crucial part of ecological continuity from the Camargue to the Mercantour.